http://brightcove.com/id:5803238988001
Madison is a tight-knit, picturesque borough located in Morris County. It's so quaint and charming that people often say downtown could pass for a movie set. That's probably why it has been the setting for movies such as "The World According to Garp" and "The Family Stone" as well as in episodes of "The Sopranos."... 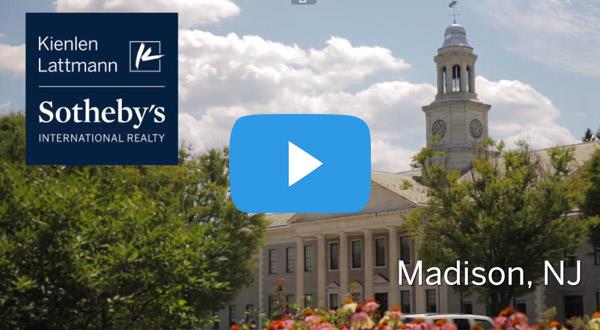 Madison is a tight-knit, picturesque borough located in Morris County. It's so quaint and charming that people often say downtown could pass for a movie set. That's probably why it has been the setting for movies such as "The World According to Garp" and "The Family Stone" as well as in episodes of "The Sopranos."

Despite its proximity to major interstates and being less than 30 miles from Manhattan, Madison has a small-town vibe. Neighbors still gather for holiday parades, barbecues, and to rally around community members in need. You can find quiet, peaceful spots here that are becoming rare in the suburbs. However, you will most likely run into someone you know every time you walk on Main Street to dine at the variety of restaurants or shop at the distinctive boutiques.

Madison is home to three higher education institutions Fairleigh Dickinson, Drew University and College of St. Elizabeth. Madison offers culture to its residents with museums, theaters and a historic past. For the sports lover, there's an opportunity to watch the New York Jets practice in the adjacent Florham Park training facility. Madison also bids ample transportation opportunities for those who choose to commute into New York for work.

View Homes for Sale in Madison, NJ
Madison's history dates back to 1715 when European settlers set up the village of Bottle Hill near where Ridgedale Avenue and Kings Road meet today. A house from that period, the Luke Miller house on Ridgedale, is perhaps the oldest home in the borough. In 1730, the settlers developed Morris County and divided the land into three townships, placing parts of Bottle Hill in Hanover and Morris Townships. After the Revolutionary War, Madison became a part of the newly formed Chatham Township, along with Chatham and Florham Park. By 1834, the government changed the name from Bottle Hill to Madison in honor of President James Madison. In 1889, Madison seceded from Chatham Township to form its own borough.

When the Morris and Essex Railroad rolled around in 1838, Madison was able to create a thriving business growing and exporting roses. The borough became known as "The Rose City" now that it had access to Manhattan, Newark, and Hoboken. Many wealthy families in Manhattan owned farmland and hunting property in the area, and as the Morris and Essex Railroad began to focus on commuters after the Civil War, those families began to branch out and build large homes in the area between Madison and Morristown that is now known as Millionaire's Row. Those families built greenhouses and hired some of the best horticulturists in the world, and the rose business continued to grow, as did the population. Many people moved to the area to work on the large estates and in the greenhouses.

Today, Madison residents are proud of their heritage and celebrate Bottle Hill Day each year in October. The street fair and town festival attracts over 10,000 people.

Dining, Shopping, and Entertainment in Madison

No matter your interests, you will always find something to do in and around Madison. Known for its diverse cultural options, the borough is home to everything from a top jazz club and museum to the headquarters for an NFL team and Shakespeare. The community has a thriving Main Street with independent shops and restaurants but is also right next to one of New Jersey's most upscale shopping malls. There is truly something for everyone in Madison.

Madison has its own museum, the Museum of Early Trades and Crafts. Founded in 1969, it is home to over 8,000 tools and artifacts from New Jersey's history. Visitors can also view live demonstrations from blacksmiths, carpenters, and other craftsmen.

Football fans and fans of the New York Jets love the fact that the team's headquarters and training facilities are just next to Madison in Florham Park. Fans can spend their summers at the 120,000-square-foot facility watching their favorite NFL team prepare for the big season.

Parks and Playgrounds in Madison

There are several popular neighborhood parks in Morris County, and one that Madison residents love is Loantaka Brook. The reservation takes up over 744 acres and has over 8 miles of walking, biking, and horseback riding trails. It also has athletic fields, picnic areas and shelters, playgrounds, and fishing opportunities.

The Great Swamp National Wildlife Refuge was established in 1960 and consists of over 7,768 acres of woods, swamp, creeks, island, and other natural habitats for hundreds of species of creatures like frogs, birds, fish, turtles, deer, fox, muskrat, and more. It is a great place for hiking and exploring.

There are several golf and country clubs in the Madison area, such as Fairmount Country Club. The private club dates back to 1962 and features an 18-hole course, a driving range, golf and tennis pro shops, a clubhouse, swimming pool, and 4 tennis courts.

Madison is a historic town with many charming homes built over the last three centuries, but it also has some condos, townhomes, and new construction. In other words, no matter your taste or budget, you will most likely find something you like here among the borough's tree-lined streets and walkable neighborhoods. You may find renovated Colonial and Victorian era homes, mid-century ranch-style homes, mansions, cottages, and everything in between. The median home value in summer 2015 is just over $600,000.
Read moreShow Less
$3,295,000
Madison, NJ
Basking Ridge Location

The information set forth on this site is based upon information which we consider reliable, but because it has been supplied by third parties to our franchisees (who in turn supplied it to us) , we cannot represent that it is accurate or complete, and it should not be relied upon as such. The offerings are subject to errors, omissions, changes, including price, or withdrawal without notice. All dimensions are approximate and have not been verified by the selling party and cannot be verified by Kienlen Lattmann Sotheby's International Realty. It is recommended that you hire a professional in the business of determining dimensions, such as an appraiser, architect or civil engineer, to determine such information.